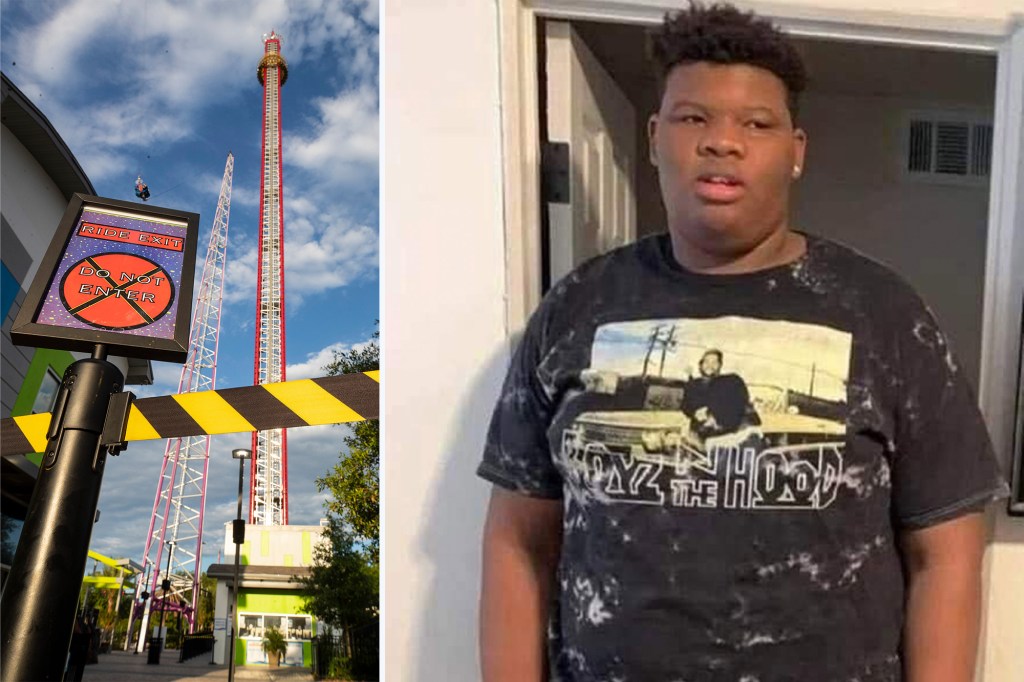 Teen who dove to death at amusement park may not have been properly restrained: call 911

A Missouri teenager who died while riding at an Orlando amusement park was not properly restrained, according to a recording of a 911 call from the scene.

Tire Sampson was just 14 and was visiting ICON Park with his family when the fatal incident happened.

“Uh, I’m not sure. They say he’s breathing, but he’s not reacting. Looks like his arms and legs are broken,” the caller said, according to an audio recording reviewed by The Post. “I don’t know where it fell from. They [ICON park staff] didn’t fasten his seat belt.

The Orange County Sheriff’s Office declined to provide new information Saturday and said the ride is currently under investigation by the Florida Department of Agriculture and Consumer Services.

“This young man was the kind of son every parent hopes for – an honor roll student, an aspiring athlete and a kind-hearted person who cared about others. Needless to say, his family is absolutely devastated. A fun visit to a theme park with his football team shouldn’t have ended in tragedy,” Crump said.

Another 911 caller said the teenager was unresponsive after the dive, not breathing and had no pulse.

Sampson, who weighed 340 pounds and was 6ft 5in tall, was denied access to other rides in the park, said his father, Yarnell Sampson, adding that his son knew something was wrong at the second the merry-go-round started.

“When the ride took off, that’s when he felt uneasy. He was like, ‘What’s going on?’ That’s when he started to panic and was explaining to his friend next to him, “I don’t know man. If I don’t tell my mom and dad that I love them. For him to say something like that, he must have felt something. he told Fox35

Sampson was treated at Arnold Palmer Hospital before later dying of his injuries, according to the Orange County Sheriff’s Office.