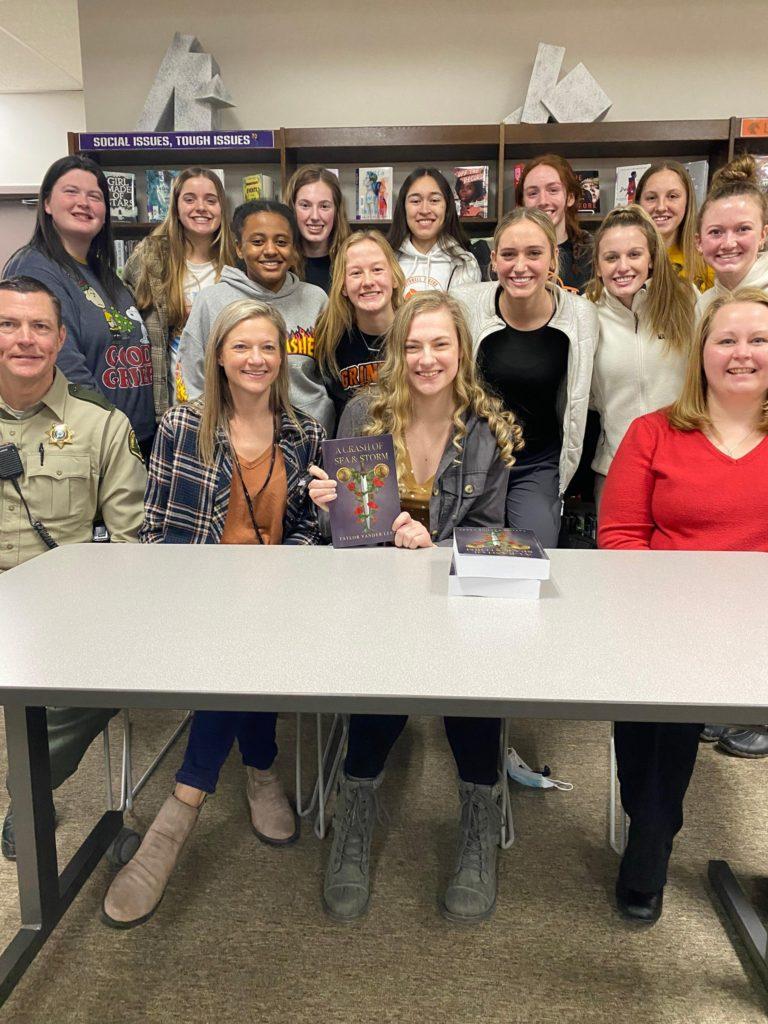 What do you want to be when you grow up? Children have all kinds of answers to this question: a singer, an actor, an astronaut, a professional athlete or even an author. Many people achieve these dreams, but few do so before leaving high school. Taylor Vander Leest, a junior at Grinnell High School, did just that when he published his first novel at the age of 17.

The book is called “A Crash of Sea and Storm”, which Vander Leest describes as a young adult fantasy and romance.

When Vander Leest was nine years old, his friend’s older sister, also a Grinnell High School student at the time, published a book. As a child, Vander Leest admired this young author and set herself the goal of one day becoming an author herself. Vander Leest says she dreamed of one day having “myself, my friends or my brothers do a book report on something I wrote”.

The idea came to her late one evening in November 2020. Although she had more time with shortened classes due to the pandemic, Vander Leest says she wasn’t sure she could write at full capacity with his extracurricular commitments.

“But then I just fell in love with it and started writing it and all the ideas kind of [came] out of nowhere,” she said.

Vander Leest’s idea quickly became “a writing frenzy all the time”. In fact, she finished her first draft in just 38 days. “Literally the only things I was doing were eating, sleeping and writing,” she said.

After finishing his first draft, Vander Leest asked his favorite English teacher, Alison Blankenfeld, to review it. “The first time I told her about it, I was so excited about it…and then she actually asked about it, like the characters and the locations and the story.” It’s been transformative for Vander Leest, as she says she never thought her writing project could turn into something bigger.

“For 13 months it was just this idea that I didn’t know was going anywhere,” she said. “I was trying to make my work comparable to something you would see in a published book, which is usually done by adults and older people.”

As of November 2021, Vander Leest’s book has gone through approximately 13 revisions. And by the end of December, Vander Leest had formatted the book and sent it for publication.

Using his savings from three years of work at the Grinnell Mutual Family Aquatic Center, Vander Leest purchased a proof copy of his book with an ISBN and barcode. When she opened the long-awaited package with her printed novel, Vander Leest says she “pulled it out and immediately started bawling.”

“I was so excited because it had been my dream since I was nine,” says Vander Leest. “It was amazing.”

Vander Leest cites his father as being particularly supportive throughout the writing and publishing process, “even when it seemed like a dumb idea that was going nowhere.” She says that “he always joked about me setting up his retirement fund.”

Because she self-published the book, Vander Leest said she learned how to stand up for herself and promote her work. She was especially excited when one of her TikTok videos on “A Crash of Sea and Storm” got over 300,000 views. After that, Vander Leest sold around 150 copies of the book. ” I was shouting. I was freaking out,” she said.

Then the positive reviews came. “It’s one thing to get people to buy it, but it’s another thing for them to read it and love it,” Taylor says. She still refreshes the book’s Amazon page every night before she goes to bed.

Since realizing her dream of “looking up my name and having ‘author’ next to it”, Vander Leest hasn’t stopped writing. Currently, she is working on the sequel to “A Crash of Sea and Storm”. She has the lofty goal of releasing this one before her 18th birthday in November.

Despite her school, basketball, volleyball and athletic commitments, Vander Leest said she tries to find the time to write a few thousand words each day.

Although Vander Leest plans to major in math in college, she says one thing is certain: she will never stop writing.

Marvin Repinski: A review of the novel, ‘The Final Case’ – Austin Daily Herald