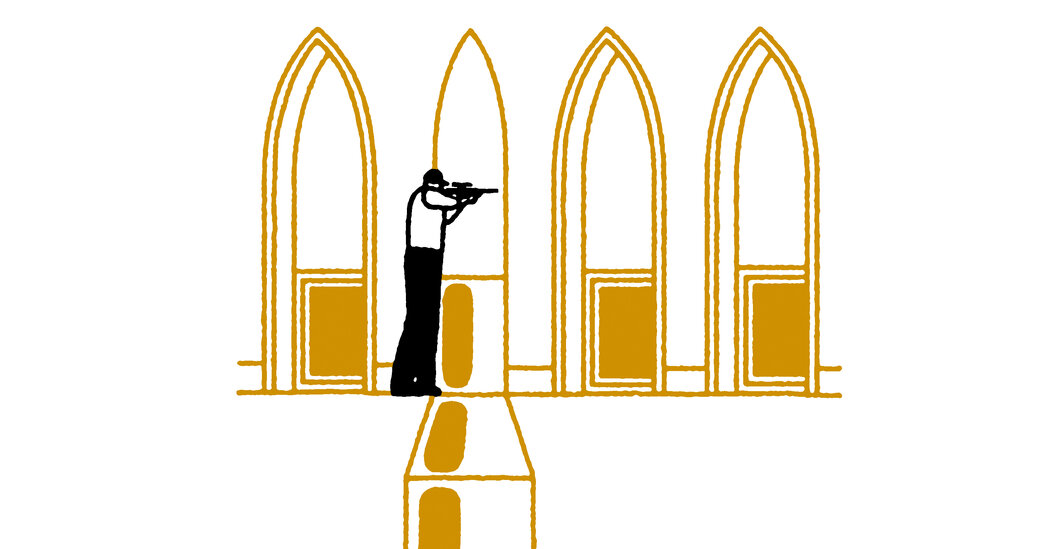 Stephen Hunter really enjoys writing about guns. This is the main takeaway from TARGETED (Emily Bestler/Atria, 364 pages, $28.99), Bob Lee Swagger’s 12th novel. Previous volumes have painted more three-dimensional portraits of the supporting players surrounding Swagger, the 74-year-old former Marine sniper with a bad hip and an innate ability to kill, but this book dispenses with nuance except in loving descriptions of specific guns, cartridges and bullets.

The plot, on the thin side, involves Swagger being subpoenaed to testify at a House Judiciary Subcommittee meeting in Boise, Idaho (location not sufficiently explained), which quickly turns into a media circus in a hostage crisis. Swagger will save the day – he’s the hero of the show, so he has to – but not before disconcerting and confusing levels of violence are inflicted on him and others. Never mind the technically understandable but still confusing subplot involving an 18th-century sniper, whose exploits are detailed in self-contained “interludes.”

Is it entertaining? Yes, to some degree, because Hunter’s syncopated prose style has a satirical edge that carries the story, even if it doesn’t entirely suppress its ideological inclinations. (It’s unclear whether journalists or politicians get more narrative scorn.) Swagger, that old dog, battered and bruised beyond mere mortal possibility, still has a few tricks in him.

In recent years, a growing number of children’s and young adult book authors have turned to the detective genre, giving them the opportunity to flex different literary muscles. The latest is Marie Rutkoski, who clearly – and successfully – stretches with REALLY EASY (Holt, 320 pages, $26.99), a thoughtful, character-driven mystery delving into the world of sex work and the people who revolve around the industry, often at their peril.

We pass the first section with Samantha, one of the top employees at the Lovely Lady strip club, who struggles with a frayed relationship, disappointment about motherhood, and her inability to set boundaries. After he agrees to take another dancer home from work, tragedy ensues. From there, as the novel unfolds, he changes perspective among the other dancers, the detectives overseeing what becomes a criminal investigation, the other club employees, and the patrons.

Rutkoski has written a thought-provoking narrative reminiscent of, more recently, Ivy Pochoda’s “These Women.” It reverses standard crime tropes and reminds readers that stripping is work and women deserve to get through that work without the constant threat of violence and death.

I’m a shameless archival nerd, happy to spend hours immersed in primary source material for the projects I’m working on (or just for fun). This is why Eva Jurczyk’s first mystery, THE RARE BOOKS AND SPECIAL COLLECTIONS DEPARTMENT (Poisoned Pen, 315 pp., paper, $16.99), caught my attention. I am happy to report that he is as successful as I had hoped.

Liesl Weiss, who is nearing retirement, never expected to head the rare books and manuscripts division of the university library where she has worked for four decades, but when her longtime boss suffers a catastrophic stroke, she is appointed interim director. Almost immediately, she discovers that a prized acquisition—a centuries-old Bible—is missing; shortly after, a colleague disappears under suspicious circumstances. So Liesl sets out to solve the two mysteries even though she is constantly and infuriatingly warned by the school’s president, who is petrified about losing big donors in the middle of a fundraising campaign. (He doesn’t even want to report the missing Bible to the police.)

It’s a pleasure to see Liesl grow more confident and assertive with each page. Jurczyk, herself a librarian at the University of Toronto, aptly captures the trend in academia to prioritize institutional reputation over truth-finding.

A common truism in mystery novels is that after their debut, series writers usually suffer a second crisis. Yet that assumption is refuted time and time again: two of the best books of the last year included second efforts, by Stephen Spotswood and Richard Osman, and one by Robyn Gigl SURVIVOR’S GUILT (Kensington, 352 pages, $27) is so good that it could end up being one of the stars of this year.

The traumatic events of Erin McCabe’s hair-raising first adventure are in the rearview mirror, but external and internal conflict abounds. Along with her legal partner, Duane Swisher, Erin – a transgender lawyer – is representing a woman who pleaded guilty to manslaughter in her father’s death even as she swears her innocence and fears for her life. Ann Parsons is not who she claims to be, and the secrets she keeps, about herself and those she protects, have the power to shake the most disturbing cages.

As the case becomes extremely complex, Erin’s sense of self-esteem is challenged and threatened, but she repeatedly rises to the occasion in the courtroom, leading to scenes. of lawsuits that I read in one breathless gulp. A revolutionary series is about to become definitive.