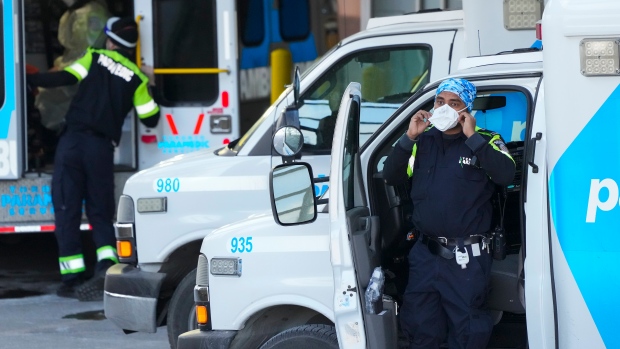 Ontario health officials are reporting a further increase on Tuesday in the number of people with COVID-19 in hospitals and intensive care units across the province.

The province reported that the number of people hospitalized with COVID-19 rose from 2,497 on Monday to 3,220 on Tuesday, while intensive care unit (ICU) admissions fell from 438 to 477.

For the first time, the province revealed details of hospital and intensive care numbers, breaking down the reason for admission.

The province reported that 54% of the 3,220 hospitalizations are people hospitalized primarily due to COVID-19, while the remaining 46% were admitted for other reasons but have now tested positive for the virus.

Eighty-three percent of patients are in intensive care primarily because of COVID-19, while 17 percent of cases are there primarily for other reasons, but also have the virus.

Ontario Health Minister Christine Elliott told reporters at a press conference on Tuesday that around 600 intensive care beds remained available in Ontario, and noted that nearly 500 additional beds can be added if necessary.

She also said the median ICU stay for a COVID-19 patient is currently seven days, up from 20 days during the peak of the Delta Wave.

According to health authorities, 21 more deaths related to COVID-19 have been reported in the past 24 hours.

The province reported 7,951 new cases of COVID-19 on Tuesday, but health officials have warned that number was underestimated due to testing limits and backlogs.

With 45,451 tests processed in the past 24 hours, the health ministry says the province’s positivity rate is around 24.4%.

Recognizing the size of the population, the Scientific Table noted on Monday, people who are fully vaccinated with at least two doses are 25.5% less likely to contract COVID-19 than those who are not vaccinated.

The province estimated that an additional 9,893 cases of the disease had been resolved as of Tuesday, bringing the number of patients recovered in Ontario to 747,289.

Today’s report brings the total number of laboratory-confirmed cases in Ontario to 896,248.

WHERE ARE THE NEW CASES OF COVID-19 IN ONTARIO

According to the province’s epidemiological report, of the 7,951 new infections reported on Tuesday, 528 cases have been identified in children under the age of 12.

Officials said at least 369 long-term care homes are currently struggling with an outbreak.

CTech Book Review: Laying the Groundwork for a Successful Career