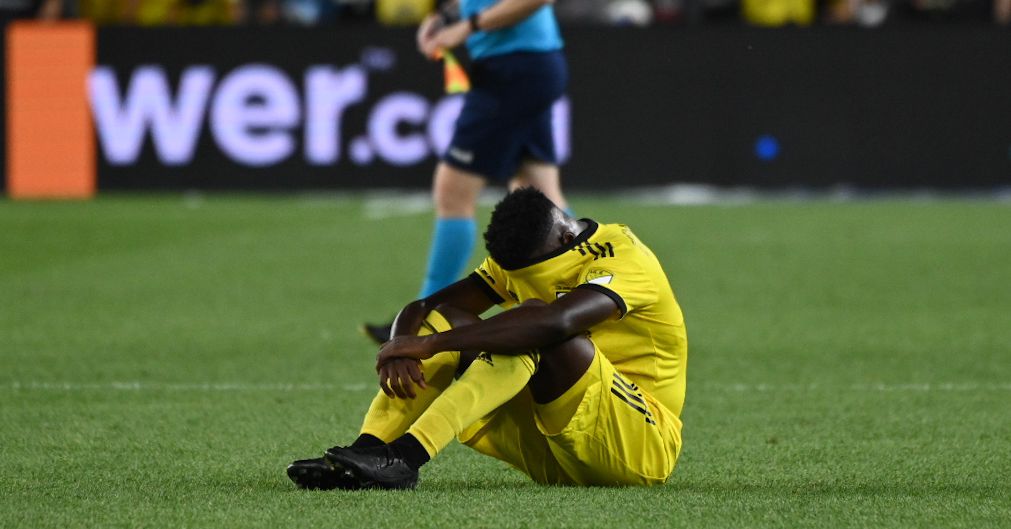 On Saturday, the Columbus Crew and their supporters celebrated “Soccer for All,” a league-wide initiative to emphasize that sport welcomes everyone, regardless of gender, sexual orientation or religion. Head coach Caleb Porter had to use the same soccer for all mentalities in lining up, with nine players on the injured list. Porter started five players who didn’t start the year on the starting 11. In a one-game mush, Columbus gives up a goal early in the second half after capitalizing late in the first, for a 1-1 draw.

Before the match, the first of the two tifos of the evening was displayed. A large three-panel tifo using the slogan “We Love Ya!” fan chant with an LGBTQIA+ pride flag emanating from the top of a render of Lower.com Field. Crew supporters also had something to like from the first 45 minutes, but it took a while to get there.

The first half was muddy for both teams. Charlotte FC, an expansion side that failed to win a game on the road and replaced their manager on June 1. The visitors sat down and tried their luck with long passes and counterattacks. Only once did he challenge the home side, but goalkeeper and evening captain Eloy Room made a quick save on the post to keep the game 0-0.

Offensively for the Crew, they had chances but mostly tried to send crosses. At the end of each was a Charlotte defender. Their best chances came from mistakes by Charlotte. In the 37e minute, striker Miguel Berry intercepted a bad back pass and found his compatriot Erik Hurtado.

Hurtado tried to cross his defender but didn’t have as much success as in Atlanta three weeks ago, but put the crew in place four minutes later. Instead of a bad back pass this time, it was a solid first touch from visiting keeper Kristijan Kahlina.

The ball bounced off Kahlina’s boot towards a charging Hurtado. The forward scored his third goal of the season, and his second in two consecutive games, to put Columbus ahead before halftime.

Before the start of the second half, a second tifo was unveiled. This time a June 19 banner depicting a player wearing a banana kit kicking a soccer ball. Unfortunately for the crew, it was Charlotte who struck first in the 50e minute.

On a deflection in the penalty area, winger Andre Shinyashiki drilled the ball into the left side of the net with no chance of saving it by Room. Game-wise, Charlotte’s pace slowed but Columbus found opportunities.

Columbus’ best moment at the start of the second half came in the 58the minute. Crew won the ball on an interception and Hurtado ran downfield to block. Running side by side with central defender Guzman Corujo, Hurtado fell on the grass. Contact with Corujo was minimal, but Hurtado was the last man before Kahlina. No whistle was blown and after referee Silviu Petrescu put his hand to his ear for a VAR check nothing else came.

Less than a minute later, Hurtado went into the book with a yellow card tackle on Corujo who, after being treated, didn’t want to leave the pitch. Hurtado looked frustrated before the tackle, which led to increased tension on the pitch and boos from Michael Bradley for Corujo for the remainder of the contest.

Another tough arbitration call came in the 84e minute. Winger Derrick Etienne Jr. turned to dribble to the side of the penalty area and was knocked down. Again, no whistle and after a brief VAR check in his headset, Petrescu went on with the game.

Porter brought in a host of offensive-minded players, but Columbus failed to register a shot on goal and Charlotte and Columbus finished the game with a 1-1 draw.

While it took the team a while to gel after a few weeks off and with new training, Berry seemed to overthink his movements in the evening. Although the striker had energy and poured himself into plays to contribute, he didn’t let plays come his way.

Berry was replaced in the 69e minute of the game for midfielder Kevin Molino, who returned from an ACL tear in 2021.

Joining Molino in the field for the crew were two unexpected names. Well, unexpected for anyone not watching the MLS NEXT Pro Development League Team 2. With Columbus tied, Porter brought in forward Jacen Russell-Rowe, who leads the MLS NEXT Pro league with nine goals in 10 games.

Fellow Crew 2 player Mo Farsi joined Russell-Rowe in the 90se minute. The Canada youth international adapted to join Luis Diaz and Russell-Rowe but ended up not making it onto the pitch initially, instead arriving six minutes later.

With a healthy squad and Cucho Hernández signing soon, this could be a rare opportunity for the striker to play for the senior team.

Columbus is heading for a two-game road streak, starting with a late kickoff at 10:00 p.m. ET against Real Salt Lake on June 25.