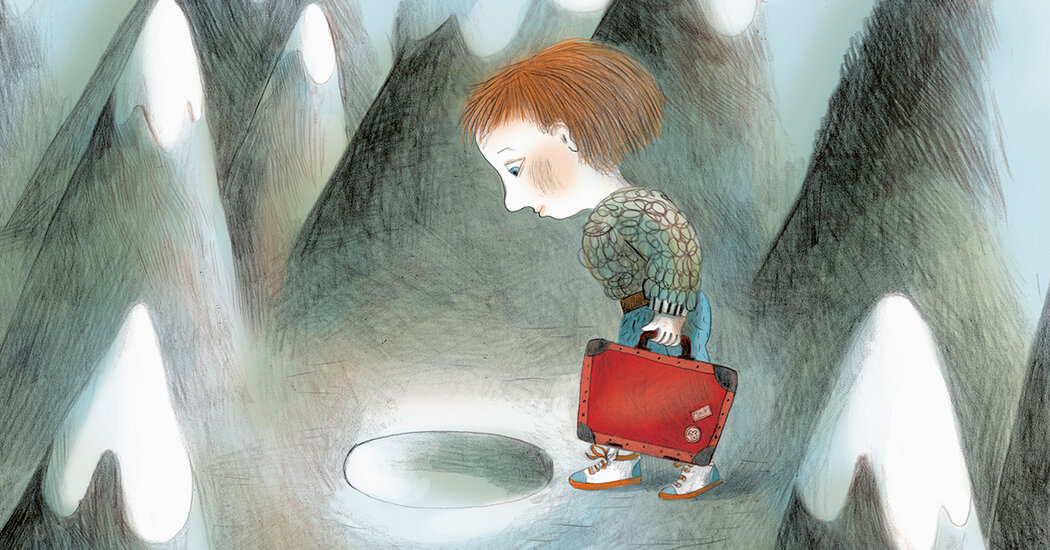 LITTLE WOMAN
The complete novel, featuring the letters and manuscripts of the characters, written and folded by hand
By Louisa May Alcott
Organized by Barbara Heller

Meg, Jo, Beth and Amy may seem too modest, serious, and marriage-minded to appeal to the youngsters of 2021, and yet the March Girls fandom is strong. Love, rivalry, independence, ambition, artistic creation, brotherhood – Alcott’s novel explores it all, leaving an irresistibly comfortable afterglow to boot. While there is no shortage of print editions of “Little Women”, the latter offers a gimmick that may be more compelling than the color photos of TimothÃ©e Chalamet (Laurie’s idol in the latest film adaptation). Heller, a film and television set decorator, sprinkled it with 17 facsimiles of letters and other ephemeral papers from the book, nestled in satisfactorily crumpled vellum envelopes. There’s Mr. Laurence’s letter to Beth (on monogrammed stationery) thanking her for the pair of slippers; Marmee’s note to Jo praising her daughter’s efforts to control her temper; Laurie’s missive inviting Jo to join him for “all kinds of larks”. We even get a fold-out replica of The Pickwick Portfolio, the self-published March Girls diary. Deciphering 19th-century curly handwriting takes some effort, but readers brought up in the age of email and text messages will be charmed by the novelty of the interactive (extremely low-tech) experience.

A book devoted to old wise sayings and aphorisms sounds masterful, but fear not! This ingeniously designed volume is as engaging as a game, one that becomes more rewarding with each turn of the game. Here’s the setup: Each page shows a scene from everyday life in Africa, of a boy hunting for an antelope at the edge of the sea. a river to a nest of ostrich chicks. The authors provide four traditional proverbs labeled A, B, C, and D, and it’s up to the readers to choose which one they think best tells the illustration. The antelope scene, for example, could represent one of those sayings: “Hurry, hurry has no blessings”; â€œYou cannot hunt two antelopes at the same timeâ€; “Dance in the sun, but turn your back on the clouds”; “A roaring lion does not kill any game.” Obviously, there are no â€œrightâ€ answers – a concept which itself can be telling for children. It’s a conversation-starter book. The proverbs were taken from over 25 African countries by Cole, a renowned anthropologist and former director of the Smithsonian National Museum of African Art, and LaTeef, who also provides the bright and textured illustrations resembling collages. As Cole says, â€œA proverb is a short sentence based on long experience. Whether you are young or old, proverbs can open your mind to a whole new way of seeing the world.

TIGER, TIGER, BURNING BRIGHT!
An animal poem for every day of the year
Selected by Fiona Waters
Illustrated by Britta Teckentrup

Attention Parents and Caregivers: You may have a new bedtime routine for 2022. This colossal, illustrated anthology contains 366 animal poems, one for each day of the year. The poets include names both familiar and lesser-known, from Christina Rossetti, Carl Sandburg and Jack Prelutsky to late 19th-century Japanese haiku master Masaoka Shiki and contemporary Guyanese poet Grace Nichols. None of these poems are longer than a page, and many are just a few lines (great for back-to-school time). Waters has unearthed poems about an astonishing array of creatures beyond William Blake’s famous tiger: grasshoppers, platypuses, hippos, snakes, a mole and even jellyfish become stars. Teckentrup’s bright illustrations, reminiscent of Eric Carle’s collages, will inspire children to watch, linger, and let the lovely sound of poetry penetrate.

These are the lucky few who can make their children waltz at the Metropolitan Museum of Art or the Louvre for a dose of art history when they feel like it. While technology has been instrumental in sharing masterpieces beyond museum walls, let’s not forget the power of good old-fashioned books. This large-scale, luxurious encyclopedic survey (based on “The Art Museum,” a Phaidon bestselling book published for a general adult audience a decade ago) echoes the experience of walking through “the world’s most magnificent museum.” There is even a “cafe” with artwork related to food. Crossing continents and artistic approaches, it covers the whole range from prehistory (the Lascaux caves) to the present day (portrait of Michelle Obama by Amy Sherald). The curation is fortunately broad and inclusive, giving real estate rights to non-Western artists and women. The Ishtar Gate of Babylonia, the scholarly paintings of the Choson dynasty, the miniatures of the Mughal Empire, the cathedral of Chartres, cubism and conceptual artâ€¦ it’s all there. Like a tour guide who knows how to hold the attention of a group of distracted schoolchildren, Gipson, an art historian, does a great job of keeping the text fun, digestible, and thankfully brief. She asks questions, points out interesting details and shares funny anecdotes. Did you know that Indian miniature artists used brushes made from fine squirrel hair? Now you do.

INSIDE THE SUITCASE
By Clotilde Perrin
Translated by Daniel Hahn

French author / illustrator Perrin creates moody and intimate shuttered books full of hidden surprises. In it, a boy packs a small red suitcase and sets off on a mysterious journey alone. Crossing the ocean and mountains, he uses the contents of his suitcase to feed himself, stay warm, unlock a cage, appease an ogre with sharp teeth, and find valuable treasure. For young readers, part of the fun is the challenge of remembering what’s in the boy’s luggage.

But most of the fun is due to Perrin’s clever use of the paper flaps. Little fingers will be eager to touch her tempting cutouts of A-frame storybook houses, a faceted diamond and a towering mousse cake. And Perrin’s technique of incorporating those paper flaps into flaps in even more flaps creates an Alice in Wonderland feel of traveling deep into a secret place.

Lyricism, inspiration and radiant grandeur were expected – even demanded – when the country’s youngest presidential inaugural poet announced she was writing a children’s book. But guess what? The book is indeed a marvel. In rhythmic, rhyming words simple enough for very young children to understand, Gorman’s moving poem reminds us that anything is possible when individual voices come together: â€œI am a song that rises and rings. There is hope where my change sings. What makes this unique poem a book in its own right are the warm and radiant illustrations by Long, who also illustrated “Of Thee I Sing: A Letter to My Daughters” by former President Barack Obama and the now version. 2005 classic of â€œThe Little Engine It Might.â€ Recalling the 1930s Works Progress Administration murals that imbued daily workers with heroic stature, Long’s acrylic and pencil images create a narrative about a steadfast young girl with an acoustic guitar who brings the children together one by one to form a motley group in their urban neighborhood. Along the way, they become a popular coalition of concerned citizens of their community. Cynics, beware, this inspiring book sings really.

THE ROALD DAHL COLLECTION (SET 1)
James and the Giant Peach, Charlie and the Chocolate Factory and The Twits
By Roald Dahl
Illustrated by Quentin Blake
Presented by Donald Sturrock

The London-based Folio Society, known for its heirloom-quality editions of classics such as “Anna Karenina” and “To the Lighthouse”, has added to its children’s list a set of three of Roald Dahl’s most beloved works, beautifully bound with fabric covers and printed on luxuriously heavy cream paper. These deliciously dark and subversive tales featuring fiery children, foul-smelling adults, bizarre occurrences, and sweet revenge are just as humorous and gripping as you remember them. “James and the Giant Peach” tells the story of an abused orphan who escapes his hideous aunts with the help of magically invaded insects inside a gargantuan peach. “Charlie and the Chocolate Factory” is the story of an oppressed boy who wins a tour of the world’s most mysterious chocolate factory. “The Twits”, the shortest of the three, is the story of a despicable husband and wife who trap birds in glue and make life miserable for a family of monkeys. (His rant against “hairy-faced men” is a lot of fun in this era of bushy beards.) The illustrations are all by Quentin Blake, whose wispy, crazy black-and-white designs became Dahl’s definitive visual partner. This fancy collection will set you back a pretty dime. But oh what a lavish gift that would make for a kid as good as Charlie, as brave as James, or unhappy enough to have Twits for parents.

THE DOG WALK
By Sven Nordqvist

This wordless book is so richly detailed, so exuberant, a child can spend hours getting lost in its pages. Swedish author / illustrator Nordqvist’s tale follows a boy walking his grandmother’s shaggy white dog. But this is no ordinary walk around the block: the duo travel through fantastic landscapes and interiors that seem straight out of a Hayao Miyazaki film or a G-rated painting by Hieronymus Bosch. there’s a garden where goats pull 18th century aristocrats on carts, and a public plaza where gnomes drink beer and a gigantic rat plays the accordion. There’s an over-the-top antique shop stocked with weapons and taxidermy, and a looped, Escher-esque train line. It’s the kind of densely illustrated book (like one of Mitsumasa Anno’s classic “Voyage” books) where you can always find a new detail that is mischievously hidden. Kids will love using the spreads to play “I Spy”. (Find the wand-shaped car! Find the man who eats the plate!) Adults will enjoy Nordqvist’s sneaky visual jokes, like the stick figures that seem like they’ve been taken out of another book and the regular appearance of Nordqvist. cranky businessmen – a reminder that wonder is where you find it.

Grammys give Linda Chorney a late nomination after initial confusion