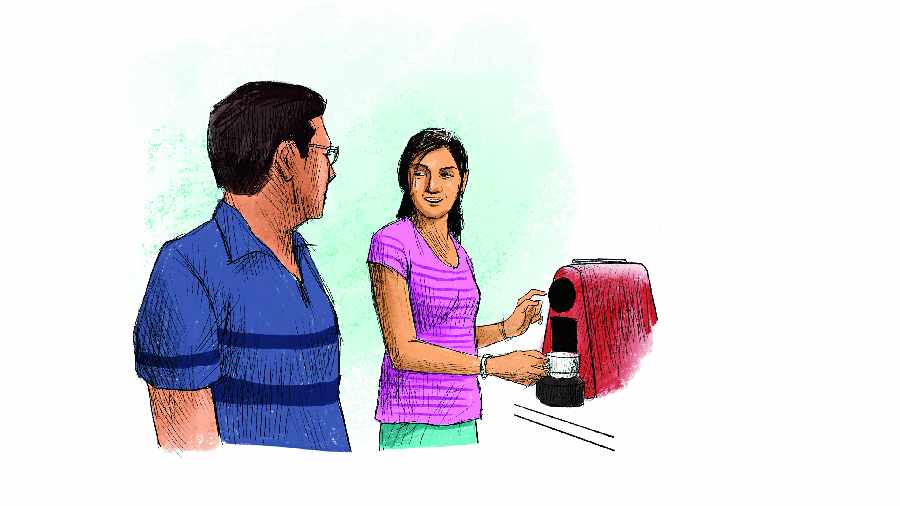 Calm and Calmer: This is the 32nd episode of Riva Razdan’s serialized novel Nonsense and Respectability, released every Sunday

to summarize: Saahil can’t get over the fact that Seher left his life without even a goodbye. But with Ambika around, he could forget.

It was a sight that calmed Seher’s mind. Four children’s heads bent over four open Oxford Circle poetry textbooks in front of a row of white desks. The only thing that spoiled the picture was that the three eight-year-old boys were desperately trying not to squirm while reading She walks beautifully by Lord Byron. And her only seven-year-old daughter was trying very hard to like the poem, but found it almost impossible, as she squinted and underlined, squinted and underlined.

Why their high school gave the kids things written in iambic tetrameter 200 years ago, Seher would never understand. A love ode that had words like ‘climes’ and ‘o’er’ wasn’t going to make sense to an eight-year-old who had just watched Dragon Ball Z Where Dora the Explorer at home. No wonder they all hate reading. Lord Byron, and his stuffy, unrelated tastes, was all they thought literature was.

“Okay,” she said, after they had spent most of the hour memorizing the words that made very little sense to them. “I have a little treat for you.”

The children looked at Seher, surprised. The boys glanced hopefully at Jaspal’s exercise bike in the corner. That was the point of the lesson. Seher would usually let them hop on the stationary bike or the treadmill in the corner of the classroom, and put on some music, for fun as a reward if they were done with their day’s work. .

“In a minute,” she said, pulling out small bags from under the table. “First these.”

Her students looked at the four gift bags, delighted. Their teachers usually gave homework, not gifts. The boys rushed to examine the contents. The little girl looked inside, very delicately. A shy smile seemed to spread across all four faces. There was a Mars bar, a Snickers bar and a copy of Willy Wonka And The Chocolate Factory by Roald Dahl, all recorded together.

She knew it was manipulation. Their tony moms were the helicopter type who left no sugar in the mouths of their perfect children. But frankly, if rotting their teeth a little made them love reading and prevented brain rot, wasn’t that a good thing overall?

“If you read this over the weekend,” Seher said, we’ll have a little book party with cake in the next class. “But you have to be able to discuss the book. I want to know who your favorite character is.

Krish, the soft-faced boy with the flowing hair, took a big bite out of his Mars bar and eyed it coaxingly. “Do you have to read the whole book?”

“Yeah,” she said. “And I’m taking a bar from each of you. You will have it at the party. Then tell me which character you liked best.

“Is it necessary? Rohan, the big boy asked. Seher smiled. Her mother had asked her the same thing when she shared the lesson plan with her. In exactly the same tone.

“It’s on your Diwali holiday reading list anyway,” Seher said, with a smile. “We’re giving you a bit of a head start, so by the time the book report arrives, you’ll have already done the work.”

“Yes but is it urgent?” Aryan asked. Again, just like his mother.

“It’s as urgent as your hunger for chocolate covered peanut butter.”

And with a quick movement, she rolled back the Snickers bars of each of them. They looked at her, their eyes wide in shocked betrayal.

But she put Wavin’ Flag, the Fifa song, on Jaspal’s sound system and the boys all seemed happy enough to get up and start running around the treadmill. She never turned it on, of course. They just let go, in the last minutes before their moms or their drivers came to pick them up.

And while the boys were distracted, she turned to the little girl. “Amyra,” she said. “Your gift is a little different.”

The shy little girl nodded. She noticed that she had three books in hers, but she didn’t say anything about it, fearing it was a punishment.

“Only because I think you’re brilliant,” Seher said, lightly touching her soft cheek. The little girl’s eyes lit up in sweet surprise. Seher took out the books. “Those were my favorite books growing up. I thought you might like them too.

In addition to Willy Wonkathere was Matilda by Roald Dahl, a marvel for any young girl who likes to be smart. And then there was Biscuit by Jacqueline Wilson, a sympathetic delight for a little girl whose parents were going through a nasty divorce. Like Amyra’s parents.

Amyra pulled out that last pretty pink-covered book and looked at it. The illustration was of a round-faced girl with glasses biting into a cookie. Kind of like Amyra who was pleasantly chubby, like a ball of butter, and who, Seher knew from the way the boys giggled during breaks, was often teased for not being small, like the others. little girls.

Amyra ran her hand over the bright headline and the little girl’s plump cheeks on the cover. Then she shyly looked up at Seher and, on a whim, kissed him on the cheek. Seher was so surprised that she let out a small laugh. Then she picked up the sweet little girl and gave her a big hug.

Seher turned around to see Adarsh ​​Mehra standing at her classroom door. He looked at her and the children, very confused. “I thought Jaspal would be there,” he explained, stepping back, to find himself directly in Amyra’s nanny.

“Oh, I’m so sorry,” he said as the nanny picked up Amyra, who with a wave to Seher left, jumping up, clutching her new satchel close to her heart.

“I’m really sorry,” Mehra said. “Jaspal wasn’t upstairs, so I thought I might find him at his gym.”

“It’s not a problem,” Seher said. “He was kind enough to let me turn his gym into a weekday classroom for my classes.”

“I can see it,” Mehra said, looking at the whiteboard, desks and coffee maker. “It’s a nice little setup.”

With a curious expression, he looked at the boys, who were now trying to dribble a stray basketball between them. Feeling the eyes of an older, impressive man on them, the boys stopped their ineffective dribbling.

Aryan ran towards Mehra and bounced the basketball at her foot. Almost challenged.

Mehra cracked a smile. It lit up his face, making him look so much younger and warmer, Seher thought. He then bent down to the level of the eight-year-old child, picked up the ball and twirled it on the tip of his index finger. Then on the tip of his pointer. Then the ring. And finally the little finger. The ball spun in a relentless blur of orange and didn’t break once.

Mehra stopped the spin. Aryan looked at him, intimidated.

“Another time,” he laughs. “Your mother is waiting at the door.”

Sure enough, there was an impatient honking from across the classroom. Aryan’s mother had come to pick up the three boys. Mehra must have seen her when her driver dropped her off.

Mehra and Seher exchanged a smile.

The boys stared at him, eyes wide, hooked on his every word. Seher realized that Mehra must appear to them as the fathers they idolized, whom they saw so sparingly, between dinner and bedtime, or for a few hours of golf at the club on Sundays.

And the boys fled, Mars bars in their pockets and books in hand, to Aryan’s mother’s Range Rover parked outside the gate.

“It was very impressive,” Seher said, turning to him. “And eight-year-old boys are very hard to impress, believe me.”

“Ha. Tell me about that,” Mehra laughed. “I have a two-year-old child at home. A man has to learn all kinds of tricks to earn his respect.

Seher’s eyes must have widened, as Mehra was quick to explain.

“Not mine. Although he looks like he is. He’s my younger brother’s son. We live together.”

“What? Because of the many property disputes that arise when brothers live together?”

“I didn’t want to force it,” Seher hesitated, regretting the obvious subtext to his statement which had been uttered without thinking. “I’m sorry, I was just making an observation. It was silly.

“No, you are absolutely right. I know of only a handful of families who manage to stay together without the distribution of wealth becoming a toxic issue between relatives. Mehra said. “But luckily for us, neither my brother, nor his wife, nor I think of money as something worth tearing up.”

Seher looked at him, his gray eyes now shining with obvious intrigue.

“All in your honor.”

“We have just learned the hard way,” Mehra smiles humorlessly. “Our family has been torn apart enough already.”

Seher chose not to ask any further questions. From Mehra’s tone and the downward turn of his mouth, she could tell that this was not a topic he would like to open up for conversation.

Yet he did not leave.

Seher then found himself studying her face intently. To a casual observer, his face could be described simply as the serious expressionlessness of the businessman. But Seher saw more than that. She saw a rigid discipline that kept sadness from crumpling her features. She saw eyebrows firmly straight, refusing to stick together. Refusing to let life’s many trials bring him down. He exuded a certain gentle strength. The one she had spent her whole life trying to embody.

“Would you like a cup of coffee?” she asked.

He looked at her, so surprised that she immediately understood the impropriety of the thing, considering the proposal he had made to his sister.

Before she could open her mouth to withdraw the invitation, he smiled.

“If Jaspal keeps me waiting, I might as well enjoy his Nespresso.”

This is the 32nd episode of Riva Razdan’s serialized novel Nonsense and Respectability, released every Sunday.

Riva Razdan graduated from New York University and currently works as a screenwriter and author in Mumbai. Her first novel Arzu was published by Hachette India in 2021