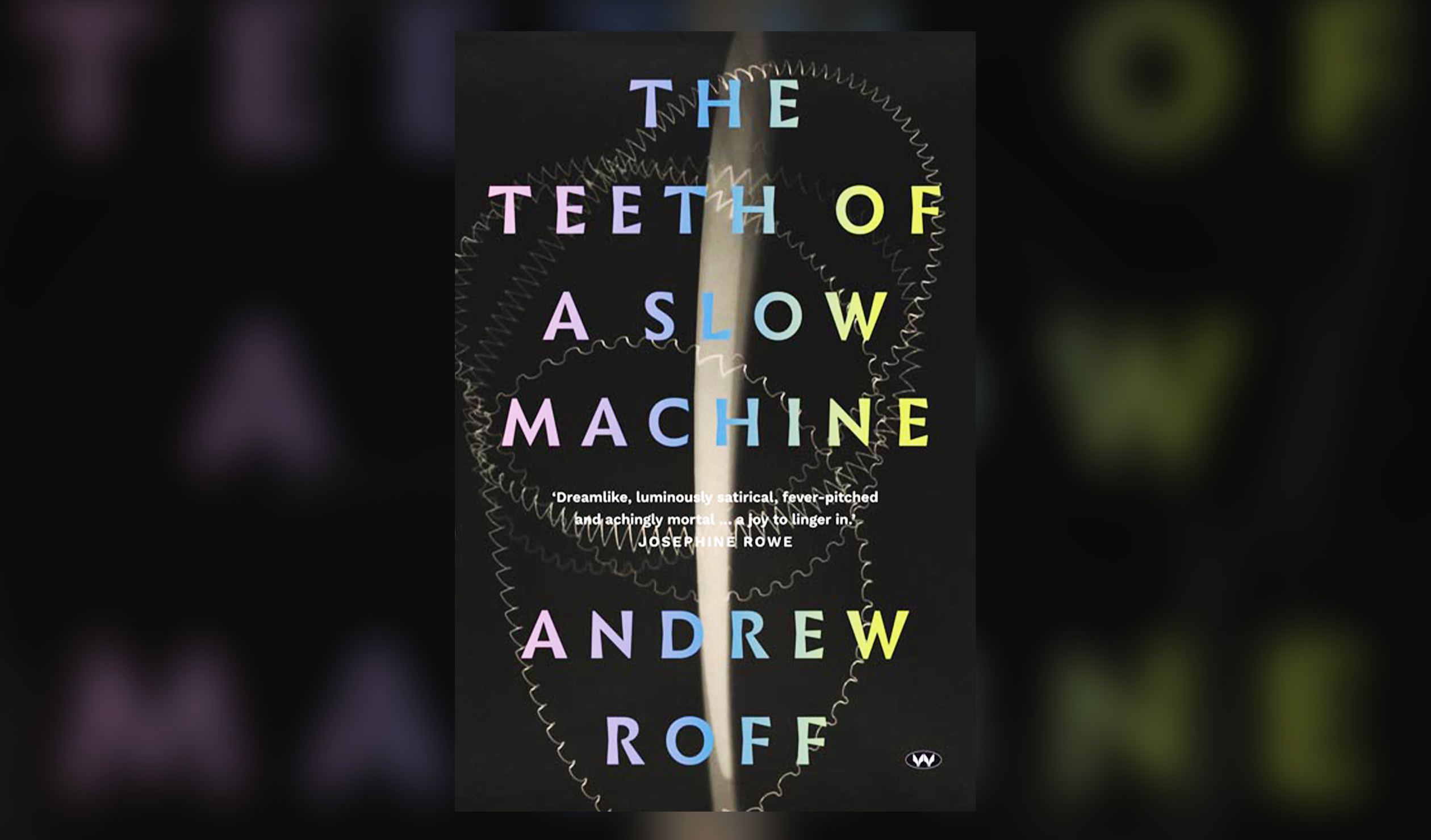 Book Review: The Teeth of a Slow Machine

Roff carefully constructs characters, place and context, both in often parable-like tales and across the collection considered together. It’s a world much like – mostly – our own, except that all the familiar manifestations of corporate power, ecological degradation, social injustice and the isolating emotional exhaustion that come with them have been pushed a bit further towards an ultimate breaking point.

There are also occasional forays into the fantastically bizarre or frighteningly strange that arises from Roff’s largely realistic universe: the special law enforcement wing of a fast-food chicken conglomerate targets those who would steal the recipe of the founder; a newly developed lightweight power pack with enough power to run a house allows anyone to fly using their own Icarus device – if they can afford it; a man left behind by human society is made to take on the role of a giraffe mascot for a sports team, accepting the kind of uncertain community he offers before a final collapse offers new possibilities; the singularity of the artificial intelligence of computers turns out to be more benign than one might have expected.

These are very current stories, without feeling forced or obligated. Climate change and nuclear contamination, COVID and the anxieties of a pandemic era, the plunder of Indigenous lands by big mining interests and the abstract inhumanity marking Australia’s treatment of asylum seekers are all woven into a perspective that wants us to see what is missing from the picture. “What’s wrong”, as a character says, without asking, but invoking a settling of scores.

Roff plays with form and voice in a variety of ways, with stories framed in computer code or centered on a mind drifting into insanity, narratives set in the experience of a role-playing adventure or told in a chronological order scrambled like a maze. like a map of the beauty, doubts and strangeness of humanity. Apart from anything else, these techniques serve to emphasize the multiple ways in which our experiences manifest. We are layered and diffuse creatures, inhabiting different – ​​but contiguous – worlds.

Indeed, this idea is perhaps most movingly rendered in those stories that examine the fragility and enduring strength of relationships, connection and caring, and what it takes to know each other. “Love leans forward,” says a narrator in the midst of a separation. “You lean forward, then one day, just for a moment, you forget. You relax and rock back so that your weight is on your heels. That’s all it takes. It’s a poignant and timely reflection on how easily it is possible to break what binds us together and on the work it takes to keep us whole.

“The only way we exist is in the minds and hearts of others,” observes the book’s final narrator, contemplating the continuous continuum of our species.

It is a slow-burning work, filled with a dull sadness and tender melancholy that hurts, but does not overwhelm.

The Teeth of a Slow Machine, by Andrew Roff, is published by Wakefield Press and available now.

Increase your impact by doubling your donations

When you pledge to make a regular weekly, bi-weekly or monthly tax-deductible donation to InReview, each scheduled donation will be matched by Creative Partnerships Australia. That means you’re supporting twice as many InReview stories to order, edit, and publish.

This article is supported by the Judith Neilson Institute for Journalism and Ideas.

Expert warns US ‘flying blind’ to pandemic’s next stage