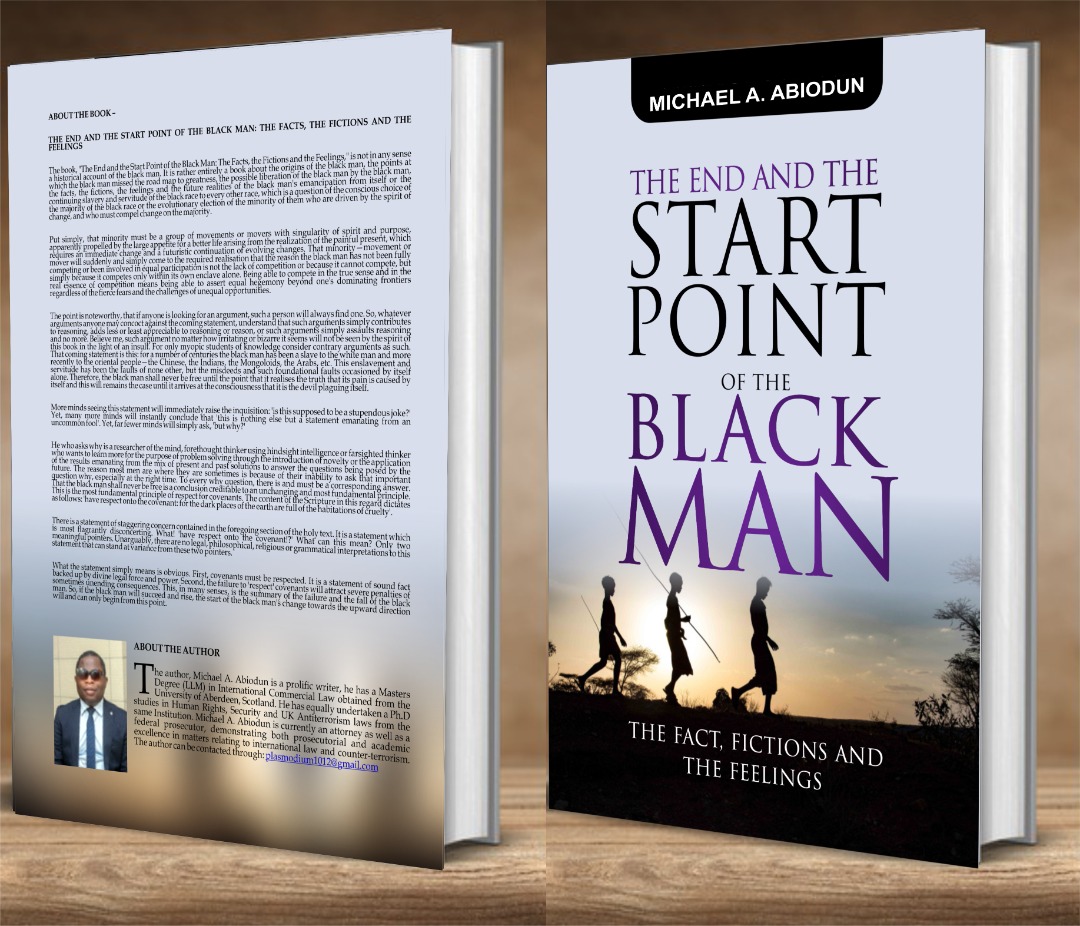 BOOK REVIEW: The Fate of the Black Man

Title: The end and the starting point of black

The man: facts, fiction and feelings

“Was the black race (and indeed the black man) cursed from the start? This is what the author, Michael A. Abiodun, described as the “never-ending and worrying question”. He sets out to provide answers in the book, a product of ingenuity and intensive research.

It examines the facts, fiction, sentiments and future realities of black man’s emancipation from himself or the black race’s continued slavery and servitude to other races.

Emancipation, he believes, lies in a conscious choice by the majority of the black race.

He also thinks that it lies in the evolutionary selection of the minority among them who must be driven by the spirit of change and who could also impose a change on the majority.

This minority, he argues, must be a group of movements with uniqueness of spirit and purpose propelled by the appetite to secure a better life for the black man based on realizing the current changes.

He argues that the minority movement needs to realize that the black man has not fully competed or been involved in equal participation or because he cannot compete. He only competes in his enclave.

The author explains that competition in the proper sense means asserting equal hegemony beyond one’s dominant borders, regardless of the daunting challenges of unequal opportunity.

He notes that whatever arguments one might make, the fact is that “for many centuries the black man has been the slave of the white man and more recently of the Eastern peoples – the Chinese, the Indians , Mongoloids, Arabs, etc.”

He insists that enslavement and servitude had been the fault of misdeeds and those fundamental faults occasioned by the black man himself. Therefore, the black man will never be free until he realizes the truth that his pains are self-caused and will remain so until he comes to the realization that he is the devil who afflicts him.

In one of his opening statements, he wrote, “Seeing is believing, as we often say and readily admit. So if another black man or associates of the black race reading this article have a different opinion about the content of this writing, the right attitude will not be to confine this article to the trash. On the contrary, further research on the subject covered in this book is reasonably the best approach. At this point, personal experience will enhance the smooth transition of belief from the realm of mere sight and conception to the level of engraved knowledge.

As usual, Abiodun demonstrates his mastery of research and his ingenuity by contributing to knowledge and public discourse. Although the book does not deal with the history of black people, as he stated at the beginning, students of history, political science and public affairs or any curious mind will find the book a good resource. Therefore, we have no hesitation in recommending the book to all libraries in the country.

Michael A. Abiodun is a prolific writer; he holds a master’s degree (LLM) in international commercial law from the University of Aberdeen, UK. He also undertook a doctorate. studies on human rights, security and UK counter-terrorism laws from the same institution.

The book, including 19 others published by the author, is available in paperbacks and online at Amazon, Payhip and Kobo.

Support the integrity and credibility journalism of PREMIUM TIMES

Good journalism is very expensive. Yet only good journalism can guarantee the possibility of a good society, an accountable democracy and a transparent government.

For free and continued access to the best investigative journalism in the country, we ask that you consider providing modest support to this noble endeavour.

By contributing to PREMIUM TIMES, you help sustain relevant journalism and keep it free and accessible to everyone.

(New Report) Book Paper Market Size Set to Grow Significantly at a CAGR of 2.7% with Data from Key Countries – The Bollywood Ticket