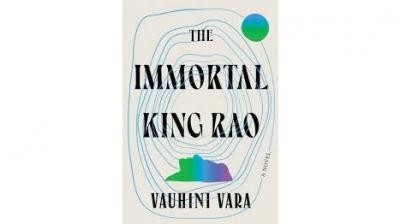 King Rao is neither a king nor a Rao – the latter is a popular surname in the Telugu state of India, and the importance of a surname needs no explanation to the inhabitants of the subcontinent. King Rao’s grandfather, a Dalit landowner, adapted the name so he could facilitate his business prospects as a coconut farmer. He built his family home and coconut empire on his land, which he acquired from its landlord; Why? It’s another story of little consequence in the larger scheme of things.

Immortal King Rao is the first novel by Vauhini Vara, who worked as the wall street journal technology journalist, and as a business writer for the new yorker. And, his book begins with King Rao leaving this world as the most influential person to ever live. A Dalit from a remote South Indian village, who studies hard, travels to the United States for higher education, marries a young woman who shares his passion for making it big in the world, and eventually rises to the top of one of the first computer companies, which ends up being the most valuable company. The Coconut Corporation which builds one of the first computers would have a lot of importance in what would be a government of shareholders. And, it is still King Rao who is at the origin of this change of nation-state.

And his story is told by his daughter, who is a surrogate child with the power to connect to the internet through her mind’s eye, whom he named Clarinet – the ability gained through genetic code – “Harmonica ” induced in the bloodstream. . Athena, the girl is imprisoned in a cell and is accused of murder — and the Algo (short for algorithm) would decide her fate based on a social profile, which is non-existent. King Rao kept Athena’s existence a secret, for obvious reasons – he successfully tried the genetic code on his surrogate daughter – a program that was declared a failure.

And it is she who reveals that King Rao engineered the world’s transition to shareholder government, where citizens collectively own corporations. And it is guided by Master Algorithm. It is this Algo that uses social profiles to decide social capital, the amount of food, water, energy, even education, hospitals and criminal justice for citizens. A system developed to end corruption and ruin, which ironically ends in chaos and Hothouse Earth.

Does any of this mean anything to you. Of course it is – on many levels.

Part personal story, part speculative, dystopian and realistic fiction – all woven into a single story – Vauhini Vara seems to have used his knowledge of technology and the business world to recreate a scenario – where the earth is heading towards the extinction, and the world is heading towards ruin, though it is controlled by a computer algorithm meant to make things better.

In the novel, ironically, King Rao is thrown out of power by the same Algo he had built.

He moves away from the mainland, chooses one of the islands to build a house and do his experiments. It is here that he sees his daughter growing up, who connects to the world via the Internet. What happens to King Rao, who decides to inject himself with the clarinet. And what keeps Athena away from Blake Island is more or less the rest of the story.

However, as you read through the book, reviewing Athena’s experiences personally and those she gathered through the clarinet, you discover a world that increasingly resembles yours in many cases, where one gradually but surely loses control of one’s life, as knowingly and unknowingly we begin to react to computer codes and algorithms, where there are companies that indeed hold far too much power, and capital is proportional to influence . Vauhini’s Coconut Corporation and shareholder government are grimly referable. This dystopian aspect of the novel is one of the reasons you turn the pages wanting to know more. Yet another reason is the eloquence of the prose, which is compelling reading despite the complexity of the narrative style.

Chester Elementary graduates 29 for the class of 2022