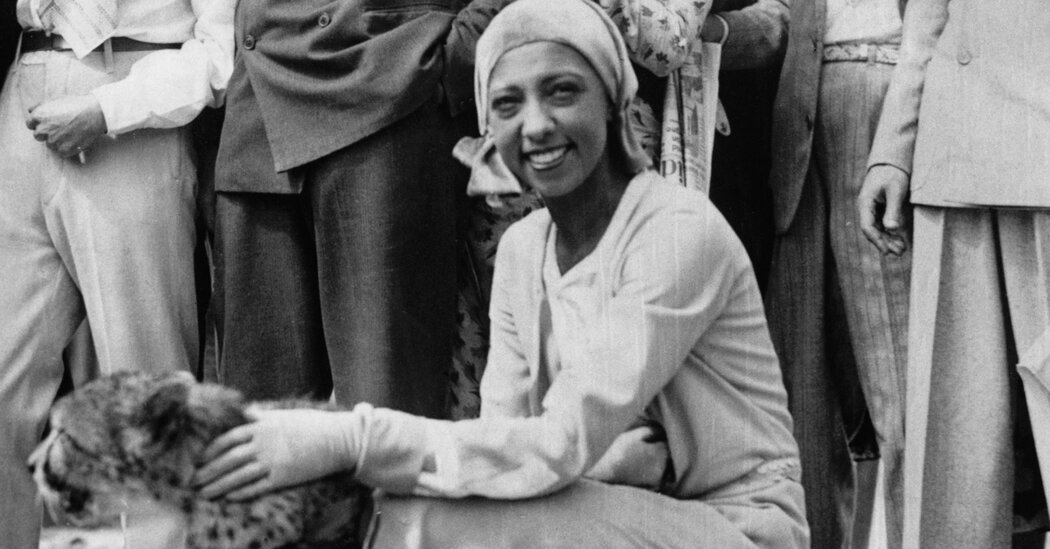 In the first half of the 20th century, Josephine Baker was one of the most famous women in the world. Born into poverty in St. Louis, she became a star of the Parisian stage in the 1920s. The stories of her walking down the Champs-Élysées with her pet (and sometimes co-star), a cheetah named Chiquita , had already made her a legend. In “Agent Josephine”, the prolific historian Damien Lewis goes even further in improving this legend, claiming that Baker was a spy for the British.

Or, more or less a spy. Lewis employs cautious language to cover the title’s bold assertion. In his author’s note, he writes that Baker told his biographer, Marcel Sauvage, “very little about his wartime activities on behalf of the Allies, and very deliberately. She rarely, if ever, spoke or wrote in detail about any of her wartime work and visited her grave in 1975, taking many of her secrets with her. A few pages later: “Baker had also played a little-known clandestine role during the war, as an occasional resistance fighter and very probably also a special agent or spy.

Baker was certainly an active member of the French Resistance. In his former home, the Château de Milande, an entire wing is dedicated to his war work. Lewis is a verbose writer who can dedicate myriad pages to his own biography: “My father and my stepmother, Lesley, live in France, in a magnificent medieval castle which they bought in a quasi- ruin with livestock still living in some of the buildings.” Sometimes he poses as the Indiana Jones of archival research, imbuing the process with drama: “I knew the records I wanted existed and were supposed to be opened to the public, but where no official really seemed to be able to get hold of them.”

In her cinematic account, Baker made a gruesome tour of Germany and Austria in 1928, where she experienced the rise of fascism firsthand. At the start of the war, she volunteered at a Parisian food bank. She became more active once the Nazis began to occupy her adopted home, signing with Britain’s Secret Intelligence Service, a CIA-like agency that worked with the French counterintelligence service the Second Bureau. She summoned a group to her chateau shortly after the fall of Paris in 1940 to listen to a speech by de Gaulle.

Maurice Chevalier is used in the book as a sort of foil to Baker’s heroism and bravery. The two stars shared a stage in Paris, where they did not get along. While she worked for the Resistance, he sang light and uplifting popular songs on German-controlled Radio Paris. Lewis quotes Baker about Chevalier: “a great artist but a very small man”.

In Lewis’s account, there are deliberate echoes of Mata Hari, the World War I cabaret dancer who was convicted of selling secrets to the Germans and shot. Baker has certainly traded on his connections, including using his friendship with Miki Sawada, the wife of Japan’s ambassador to France, to gain access to the embassy. And she leveraged her own celebrity status – and someone who doesn’t fit in anywhere and everywhere – as cover, employing a tour through Lisbon and Morocco in order to flee France.

She brought with her a menagerie of exotic animals, including her Great Dane, Bonzo; Gurgling the monkey; Mica the golden lion tamarin; Gugusse the marmoset; and two white mice named Curler and Point d’Interrogation. Lewis’ assertion – that for Baker, unconditional love of animals was probably easier than relating to humans – is both simplistic and probably accurate. Either way, he quickly moves from this unusual foray into psychological analysis back to his literary strengths, facts and action.

Sometimes it feels like Lewis is just accepting the narrative that Baker has consciously created for herself. The book delves in and out of biography, moving from World War II to her difficult youth as the daughter of a teenage mother; she was raised largely by her grandmother, who was born into slavery. The United States is rightly described as a country where racism is both endemic and open. But France is idealized. Lewis quotes a Parisian club owner who told a racist American patron that “you are in France…and here we treat all races the same”. Lewis undoubtedly accepts the claim, an overly simplistic and frankly inaccurate view of a country that struggles with race to this day. But then, this is after all a book that begins with Baker’s quote: “More is achieved by love than by hate.” / Hatred is the downfall of any race or nation.

Fascinating subject at a pivotal time in his life, Baker still does not come to life on the page and remains unknowable. Perhaps her ability to conceal and charm is why she was so good at espionage, but Lewis doesn’t take much time to explore how she crafted her own story. ” I do not lie. I make life better,” she once told a reporter. But she is a complex woman, who owned a Jewish prayer book, wore a djellaba in Marrakech and had a Roman Catholic funeral when she died in 1975.

What is compelling is the ragtag and oddly posh team of supporting characters that surround her on her adventures. There is Captain Maurice Léonard Abtey, who went to work in Paris by kayak on the Seine; Father Dillard, a Jesuit resistance fighter born at the castle; Hans Müssig, alias Thomas Lieven, “a Teutonic equivalent of James Bond” whose life story has been turned into a thinly veiled book with the exceptional title “It Can’t Always Be Caviar”.

Wilfred “Biffy” Dunderdale is particularly memorable. The son of a shipping tycoon (and supposed model for 007), he drives around in a chauffeur-driven Rolls-Royce, uses an ebony cigarette holder and wears gold Cartier cufflinks. (The famous French jeweler makes so many appearances in the book that Cartier should consider sponsoring, or at least selling, replicas of the bracelet Baker ordered for a lover, engraved with the letters PFQA – for “stronger than love.”)

Lewis points out that ultimately the war years were Baker’s coming of age and real awakening. Baker returned to American stages in 1951, where she was refused a room in New York, received threatening phone calls from the Ku Klux Klan, and was the subject of rumors that she was a communist sympathizer. And yet, she was ready to face her home country and its problems; Baker spoke at the March on Washington in 1963 ahead of Dr. Martin Luther King’s “I Have a Dream” speech.

Does it really matter if Josephine Baker was a particularly active member of the French Resistance, or a real spy? Not to the French government. In the end, she obtained the Resistance Medal With Palme, the Croix de Guerre and the Legion of Honor, and was buried in the Pantheon. All the trappings, in short, of a true French heroine.

Marisa Meltzer’s most recent book is “This Is Big”, about the founder of Weight Watchers.

Where is the ‘Crawdads’ review?