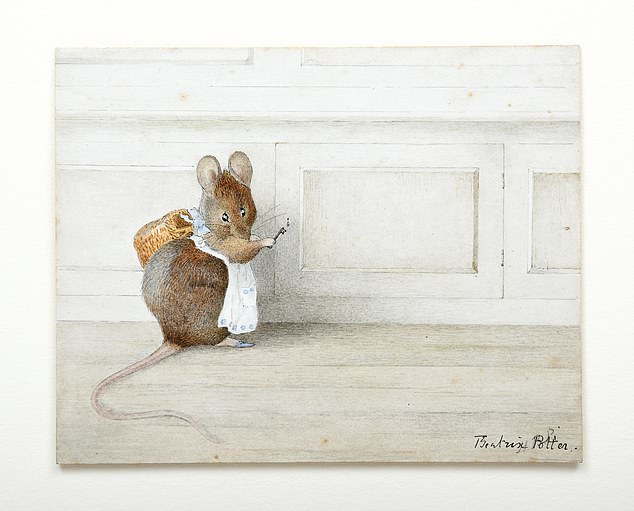 Beatrix Potter painting of mouse wearing apron goes on sale for £85,000 after being rediscovered

Beatrix Potter’s painting of a mouse wearing an apron is up for sale for £85,000 after it was rediscovered by book scholars

By Dalya Alberge for the Daily Mail

A charming Beatrix Potter painting of a mouse in an apron has been rediscovered by book scholars.

From 1891, the unpublished watercolor shows the creature depicted in extraordinary furry detail.

Before becoming one of the world’s favorite children’s authors and illustrators, Miss Potter honed her craft with this illustration for the nursery rhyme Appley Dapply, about a mouse foraging for edible treats.

The watercolor was dropped as only three images were used when Appley Dapply’s Nursery Rhymes was published in 1917.

Today the painting has been rediscovered by Peter Harrington Rare Books, a London antiques specialist, and is on sale for around £85,000.

This coincides with a major exhibition, Beatrix Potter: Drawn to Nature, which opens this month at the Victoria and Albert Museum.

Measuring 3½ inches by 4½ inches and signed by Miss Potter, the Appley Dapply watercolor was part of an American collection, having been sold by descendants of its publisher in the United States.

Miss Potter then made a name for herself with The Tale of Peter Rabbit and other humorous stories about animal characters including Mrs. Tiggy-Winkle and Jemima Puddle-Duck.

Book expert Dr Philip W Errington said: ‘The work she did in the 1890s is absolutely amazing… No one can do fur like Beatrix.’

“She seems to have used a bristle or two on the brush to get the finer details.” 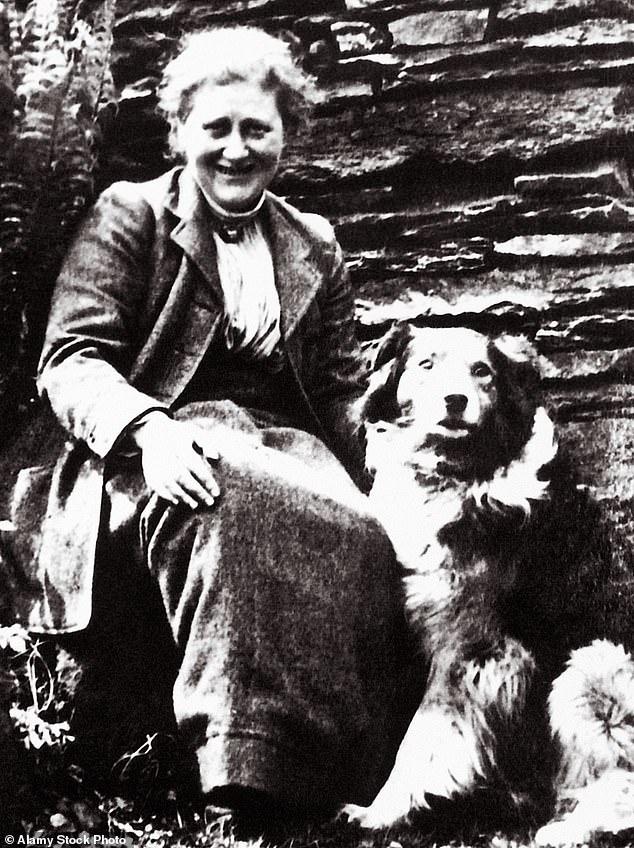 He added: “It’s phenomenal. How anyone could see to do that is beyond me – and we’re talking about Victorian lighting.

“Her eyesight had deteriorated in the 1920s. Before the book was published, Potter realized that she had lost one of her original 1891 watercolors and so provided a new one.

‘She herself said, ‘I won’t be able to do the same quality of watercolour’… She knew her eyesight had gone down.

“The second illustration published in Appley Dapply is one of the last drawings from around 1917. It shows the difference in quality in that it is much harsher and has a heavier line.”

In the newly discovered version, Appley Dapply clutches a key to a closed cupboard door.

In the published illustration, the mouse searches for a plate in the open cupboard.

Dr Errington said: ‘That’s what’s so exciting about this piece. This is part of his work on what is aesthetically pleasing. In the flesh, it’s one of those things that you can absolutely stare at for hours.

“You can see the way the floor hits the closet, very deliberate mouse placement. You have the depth of fur and mouse over a bland background, which makes this silhouette stand out.

He noted that the archives of the V&A, Frederick Warne and the Free Library in Philadelphia have extraordinary Potter collections, but added: “They are all in captivity, so to speak. The number of times an original piece of this quality hits the open market is rare and far between

Request for audio and/or video recordings