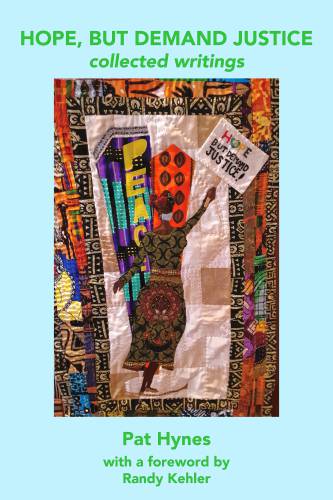 Maybe, like me, you’ve always wanted to read Howard Zinn’s classic, “A People’s History of the United States” and, like me, you never had time to read the whole story. alternative of 729 pages of the history of our country.

Zinn’s book is considered an “alternative” narrative by some because it brings from the eyes, ears, and voices of the oppressed, the victims of United States laws, programs, policies, and wars. I remembered his book while reading Pat Hynes’ recently published “Hope, But Demand Justice,” a collection of articles, reviews, and commentaries published by Hynes on a wide range of topics.

Like Zinn, Hynes goes below the surface to expose the underbelly of conflict, the unheard voices, the realities, and the consequences (intended or not) of the policies pursued by those in power.

Hynes’ writings are loosely collected around broad topics of climate change, militarism, nuclear weapons, the pandemic, feminism, veterans, and social justice. It is astounding that such a thin, 215-page book can cover so many issues of current concern and conflict.

Randy Kehler, a world-renowned grassroots activist hero, says in his foreword to the book, “I trust Pat Hynes,” and I agree. Hynes, from Montague, does his homework. She is an accomplished researcher with a career as an environmental engineer, often tasked with cleaning up Superfund sites, and has served as a director of environmental justice projects.

After relocating to western Massachusetts, knowing that there is no peace without justice, Hynes and others added “justice” to the name “Traprock Center for Peace and Justice.”

Reading his writings on war, militarism, nuclear weapons and international relations at this time is particularly challenging, relevant and revealing in the light they shed on our current world situation, with Russia invading Ukraine and the ever looming threat posed by nuclear weapons. Hynes captures the missed opportunities, the forces at play, and the realities of the path we have chosen.

With clarity and force, Hynes tells us that four years, 1898-1902, set our course for the next century and the 21st century for world preeminence and power. She goes on to share how this mentality created our “Offense” department erroneously named “Department of Defense”.

She suggests that living by the “golden rule” in international relations today would manifest a very different situation, especially with regard to our two existential threats of climate change and nuclear weapons.

As this final Earth Day has been observed, it is poignant to read of the countless assaults on the natural world that sustains us. Hynes traces how polluted rivers, hazardous waste sites, pesticides, and agricultural practices all contribute to species extinction, climate change, and sweeping social injustice.

In a few paragraphs, Hynes connects the dots between General Electric’s path of toxic runoff into the Housatonic River in the 1980s and the rising awareness and birth of environmental justice in Warren County, North Carolina.

Time and time again, Hynes describes and denounces how our “strength is truth” mentality makes the Pentagon the number one polluter of climate change emissions around the world. Speaking of the United States, Hynes says, “Militarism is the most oil-intensive activity on the planet.

Ultimately, this is a book about peace. As Hynes writes, “We women have almost universally won our rights, tactically and intelligently throughout history, without the use of warplanes, drones, soldiers, bombs or guns. .”

And this is about justice. It is about everyone’s right to have their needs met, thus creating the possibility of living in peace with each other and with the planet. It is difficult to read JFK’s words spoken on June 10, 1963: “For in the final analysis, we all inhabit this little planet. We all breathe the same air. We all cherish the future of our children. And we are all mortal.

Hynes’ book explains how and why we have diverged from this view of Kennedy.

Clearly written, incorporating personal experiences with historical perspective, Hynes presents us with an often “alternative or more complete” view of the many devastating issues facing us today and an understanding of how we came to this juncture.

“Hope, But Demand Justice” is written in short essays to be read individually or by specific topic. You will want to keep it handy as a reference book to remind yourself again and again that there are always choices, and of the many other individuals and groups who have chosen to work for peace and justice. This is necessary reading for all of us.

“Hope, But Demand Justice” is available at local bookstores and can also be purchased at pathyneshopebook.com.

Susan Lantz from Easthampton is a longtime collaborator and campaigner with Pat Hynes as a member of Nuclear Free Future.